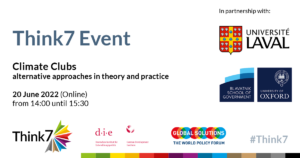 In the run-up to the G7 Summit, Clara Brandi organized a Think7 Event on “Climate clubs: alternative approaches in theory and practice.” This year’s T7 process is led by the German Institute of Development and Sustainability (IDOS) and the Global Solutions Initiative (GSI), mandated during the German G7 presidency in 2022. The T7 event was co-organised with the Blavatnik School of Government, Oxford University, and Laval University, as part of the Aligning Climate and Economic Governance (ACEGOV) network. During the online exchange, more than 100 participants discussed the climate club idea proposed by the German government in the G7 context while also collecting ideas on different possible club designs from various angles and reflecting on clubs from the perspective of global justice.