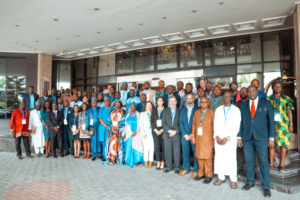 Governments all over the world are struggling to mobilise domestic resources. The same governments, however, typically provide generous tax breaks, exemptions or incentives to companies and private households – often without even knowing the real costs of those mechanisms in terms of revenue forgone. Could better information and more exchange on tax expenditures pave the way to reform?

Jointly with the Addis Tax Initiative (ATI) and the Council on Economic Policies (CEP), IDOS organises a series of regional workshops on tax expenditures. The first of these workshops took place in Lagos, Nigeria, on 27-28 July 2022. A total of 18 West-African countries were represented – not only by delegates from revenue authorities and ministries of finance, but also by their respective legislative bodies. “It is great to see so many members of parliament participating at the workshop – for some of them it is the first time that they discuss about tax expenditures with their peers”, remarks Dr Christian von Haldenwang, senior researcher at IDOS and a co-lead of the project. “We want them to become ambassadors of tax expenditure reform in their home countries”.

With the Global Tax Expenditures Database (www.GTED.net), IDOS and CEP do not only provide comprehensive and reliable information, but we also aim at creating a global network of stakeholders and experts that could push for a more rational use of tax expenditures worldwide. The next joint workshop with the ATI will take place in October in Nairobi, Kenya, covering East Africa. Workshops in Asia and Latin America are going to follow early next year.