As mandated think tanks of the Think7 process during Germany’s G7 Presidency, the German Development Institute/ Deutsches Institut für Entwicklungspolitik (DIE) and the Global Solutions Initiative (GSI) hosted the Think7 Summit in Berlin on 23 and 24 May 2022.

In partnership with the Friedrich-Ebert-Stiftung (FES), the German Council on Foreign Relations (DGAP) and the Aspen Institute Germany, the hybrid Think7 Summit 2022 took place at the premises of the FES. Representatives of leading research institutions, decision-makers of the German and other G7 governments, and representatives of international organisations exchanged views and debated on policy recommendations for the German G7 Presidency. In a keynote address, Wolfgang Schmidt, Head of the Federal Chancellery, addressed the outlook for the G7 Summit in Elmau and elaborated on the current challenges faced by the German G7 presidency.

Rebeca Grynspan, Secretary General of the United Nations Conference on Trade and Development (UNCTAD), spoke about the current global economic challenges caused by the war in Ukraine and the Covid-19 pandemic.

The Think7 Summit focused on the exchange between the Think7 Task Forces and decision-makers from the German government and international organizations on recommendations for action for the G7. Further panel discussions and working group sessions were devoted, among other things, to the relationship between the G7 and the G20, the role of the G7 in a changing world order, and the importance of the G7 for future generations.

The Video for the event:

DIE participated as Co-Chair, facilitator, speaker and moderator in many sessions. Building on the work of the T7 Task Forces, Prof. Dr. Anna-Katharina Hornidge, director of DIE and Think7 Co Chair, Dr. Axel Berger, deputy director (interim) of DIE, Dr. Stephan Klingebiel, Head of Programme Inter- and Transnational Cooperation, Dr. Ina Friesen, Senior Researcher at DIE, Dr. Daniele Malerba, Researcher at DIE and Prof. Dr. Ulrich Volz, Senior Researcher at DIE, among others, presented and debated the implications of the Task Forces‘ recommendations for the thematic areas prioritised by the German government: 1) sustainable planet, 2) economic stability and transformation, 3) healthy lives, 4) investments in a better future and 5) strong together. In addition to the sessions led by the Task Forces, high-ranking representatives from politics, academia and civil society explored in panel discussions and keynote speeches the challenges and tasks of the G7 countries and the German Presidency to bring about a sustainable economic recovery and a strengthened multilateral system. Among the panellists and participants were also participants of this year’s African Academy and many members of the Managing Global Governance Network.

On 24 May 2022, the chairs of the Global Health Task Force, Prof. Dr. Anna-Katharina Hornidge and Prof. Dr. Ilona Kickbusch, Founding Director and Chair of the Global Health Centre at the Graduate Institute of International and Development Studies in Geneva, presented three key recommendations for action for the G7 countries in the area of global health in a roundtable discussion. Based on the issue papers published by the Task Force, the Chairs recommend the design of a Global Health Compact 2030 that 1) improves and strengthens multilateral health governance, 2) expands the area of surveillance and pandemic preparedness through the establishment of a Task Force on Planetary Health, and 3) pursues the design of a multilaterally coordinated health research system that enables joint agenda setting. The implementation of these goals requires a series of dialogues on global health in which countries of the G7, G20, and beyond jointly identify and prioritise global challenges.

On the occasion of the Think7 Summit the Think7 also published its communiqué that summarises around 70 papers by the Think7 presenting policy recommendations for the G7 Summit at Elmau Castle. The G7 group should work more closely with G20 states to strengthen multilateral organisations and counter a relapse into a polarised world. In addition, it is important that the G7 takes action to bring about an end to the war in Ukraine. These are key recommendations of leading think tanks from the G7 countries – the Think7 – to the German government as G7 chair. In their second central recommendation, the authors advocate for common standards for measuring human well-being that take into account not only economic criteria but also the state of the environment and social cohesion. This is the prerequisite for the G7, together with the UN, OECD and G20, to advocate for a global system change that focuses on human well-being within the ecological limits of the Earth system, the communiqué states. The third central recommendation of the Think7 to the Heads of State and Government is that the work of the G7 should be more continuously accompanied by research and civil society in the future – until now, the composition and goals of the various G7 Engagement Groups have changed with each new G7 Presidency. In a public evening event at the DGAP premises, the role of the G7 within a new geopolitical environment was further discussed with Petra Siegmund, Deputy Director Asia and the Pacific of the Federal Foreign Office, Kazuo Matsushita, Senior Fellow at the Institute for Global Environmental Strategies (IGES) and Claudia Schmucker, Head of Geo-Economics Program at DGAP. It was moderated by Martin Bialaki, Editor-in Chief International Politics.

Read part of the discussions also on Twitter, following the Hashtag: Think7

To get a visual impression, have a look at our picture album on Flickr: 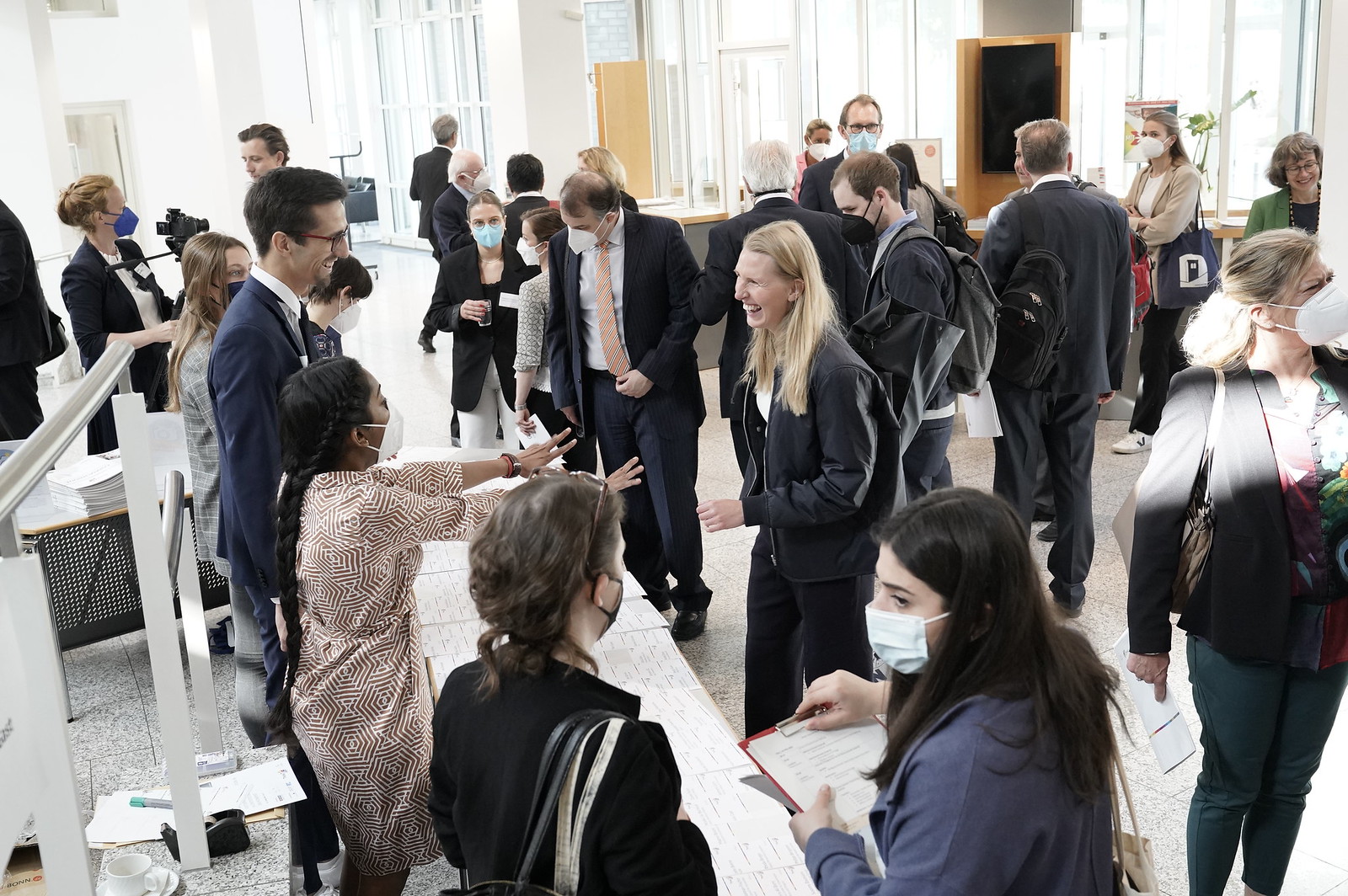 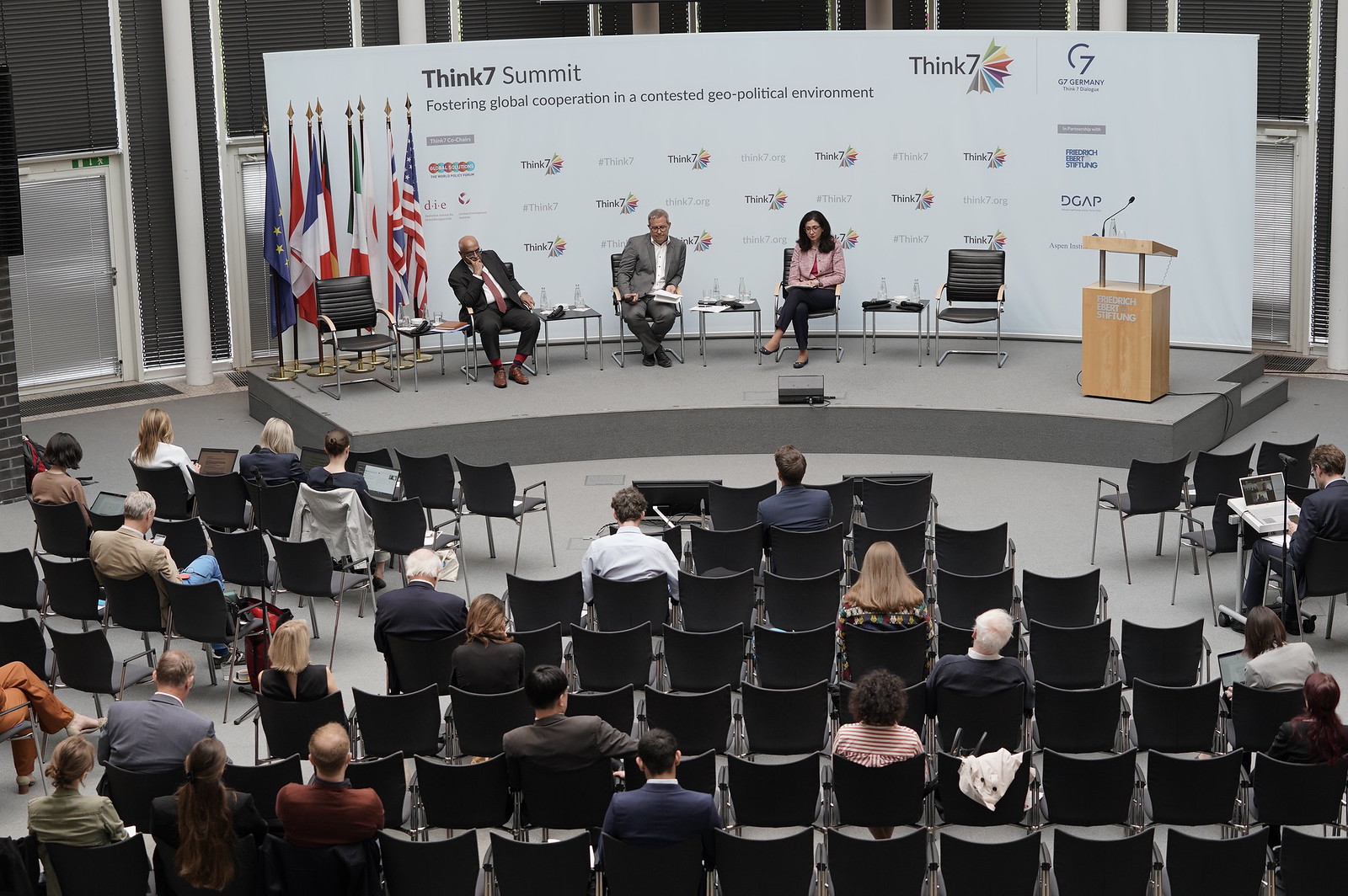