Panel during the conference „Africa’s employment perspectives towards 2040“ at the DIE, ©DIE

Sub-Saharan Africa needs to create 13 new million jobs to employ the young cohorts entering the labour force for the first time. It needs to establish about twice as many jobs if the aim is to provide decent formal employment, within the next 30 years, to the 360 million Africans currently employed informally in typically precarious conditions. Where could all these decent jobs come from? 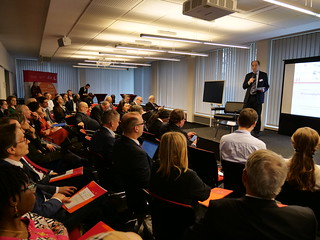 The conference aimed at finding answers to this question with a medium-term perspective in mind. Starting from the observation that the world economy is facing several deep transformations simultaneously, we asked what the world economy is likely to look like in 2040 and how African economies could position themselves in such an economy. Some 50 invited experts discussed eight potential game changers and their effect on Africa’s structural transformation in thematic sessions and then jointly discussed interdependencies between these trends, potential development pathways as well as their implications for governance. Relevant game changers include: transaction cost-reducing digital technologies; increasing global demand for high-value agricultural products; decarbonisation and the replacement of fossil resources with biomaterials; China becoming a high-income country that sheds labor-intensive light industries; Africa’s rapid urbanisation; and increased trade integration within Africa, among others.

Overall, the conference revealed many promising micro-dynamics the African economy can build upon. But there are no indications of one big game changer allowing for a profound and inclusive structural transformation (of the kind that light manufacturing for exports had been in Asia). Growth dynamics will stem from urbanisation and potentially intra-African trade integration, but less so from exports out of Africa.