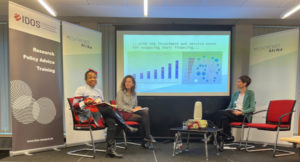 The workshop was organised by IDOS, the German Institute for International and Security Affairs (SWP) and the Kiel Institute for the World Economy (IfW) within the framework of the joint project “Megatrends Afrika”. Sina Schlimmer, Research Fellow at the French Institute of International Relations (IFRI), introduced her work on the new urban megaproject Diamniadio in Senegal. In her work, Schlimmer raises the question to what extent New City projects represent a stitch and sustainable answer to challenges that go along with urbanisation in African countries. She contends that the urban hub of Diamniadio is a top-down policy instrument that leaves little room for civic participation. The second input, by Michael Roll, senior researcher at IDOS, critically reviews Lagos’ policy reforms since 1999 that are often presented as best practice examples. He unpacks that the reforms only benefitted a minority of Lagosians while the majority living in informal settlements was left behind. Finally, urban economist Astrid R. N. Haas gave an input on “Institutional reforms for city financing: improving cities’ creditworthiness and expanding the tax base“. She argues that administrative reforms are the first important step to build cities creditworthiness. In addition to strengthening the supply of finance, it is also critical for cities to be able to build their demand for it by developing project pipelines for transformative projects.

In the ensuing discussion the participants agreed on a prevailing mismatch between many large scale urban infrastructure projects and the needs of citizens and affected communities. In particular, new visionary city projects fail to integrate new structures into pre-existing settings. To avoid a situation in which ghost towns and densely populated agglomerations lacking basic infrastructure sit side by side, it requires a more effective involvement of and coordination between the different levels of government, civil society and the private sector. Supporting administrative capacities can be a quick win as opposed to larger policy reform processes. Lastly, project cycles of donors are not compatible with the long-term budgetary needs of cities and should be adapted accordingly.

For more information on the topic of urban governance and our work on „megatrends“, please visit www.megatrends-afrika.de.