Global Governance in times of war 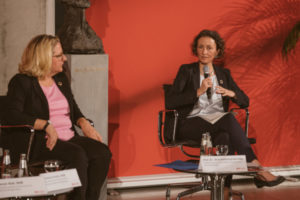 Russia’s war of aggression in Ukraine has profound implications for the international order. Against this backdrop, effective and legitimate global governance is all the more important, while at the same time confronting new challenges. In the Directorate of the German Institute of Development and Sustainability (IDOS), the topic of global governance in times of war continued to be a particular focus in September.

As a member of the International Scientific Advisory Board of the Think20 (T20), Prof Dr Anna-Katharina Hornidge took part in the T20 Summit in Indonesia at the beginning of September. The T20 Summit was dedicated to the role of the G20 in addressing global challenges and raised the question of whether Indonesia’s presidency heralded an increasing ‚Southernisation‘ of the G20, which would be further expanded by the upcoming presidencies of India, Brazil and South Africa. Anna-Katharina Hornidge reflected in a panel discussion with representatives from science and politics on how a green and just energy transition can succeed in the countries of the G20 and beyond, and discussed the possibilities and limits of current transnational cooperation formats in a side event co-organised by IDOS.

Prof Dr Hornidge also reflected on the impact of war on the international order and Germany’s external policy fields together with Svenja Schulze, Federal Minister for Economic Cooperation and Development, in a debate on „the historical turning point and the Global South“ held on 8 September. The focus was on how Germany, the EU and international organisations can cooperate with countries of different income groups and all continents in the future against the backdrop of shifting geopolitical power structures, and what role they can play in addressing global challenges such as climate change or worldwide food security. 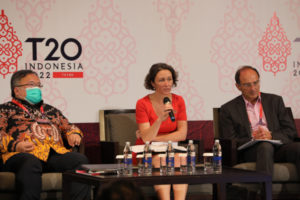 Meanwhile, Dr Axel Berger, Deputy Director interim at IDOS, focused on the importance of global governance in the area of international trade and investment policy. As part of his participation in the Public Forum of the World Trade Organisation, which took place from 27 to 30 September, he looked at the question of how trade can contribute to economic recovery in post-Covid times. In a side event organised by IDOS together with the Graduate Institute, Axel Berger and representatives from politics and business discussed how the contribution of foreign direct investment to sustainable development can be strengthened and what role the negotiated agreement on Investment Facilitation for Development can play in the WTO framework. Dr Berger also organised a meeting of the G20 Trade and Investment Research Network (TIRN) to discuss the role of the G20 under the Indian Presidency in 2023 with regard to reforming the multilateral trading system. TIRN is a network of trade and investment policy researchers, co-founded by IDOS, whose common goal is to provide informed, research-based analysis to support the deliberations of G20 leaders.

Advisory work by the directorate on food security

This month, the global food supply was also in the foreground of several activities. Prof Dr Anna-Katharina Hornidge, Director of IDOS, took part in a soirée of the German Agribusiness Alliance (GAA) in Berlin on 22 September and in an event organised by the Global Crop Diversity Trust on 27 September on the topic of „Food Security and Crop Diversity“. At the GAA Soirée, Anna-Katharina Hornidge discussed the role of politics and business in sustainable food systems together with Cem Özdemir, Federal Minister of Food and Agriculture, Svenja Schulze, Federal Minister for Economic Cooperation and Development, and representatives of other German ministries and leading companies in the German agricultural and food industry. Against the backdrop of the Crop Diversity Day, the event organised by Global Crop Diversity Trust examined the triangle of nutrition, biodiversity and climate. Together with representatives from politics and academia, Anna-Katharina Hornidge explored the global need for action and possible solutions that can be implemented quickly to ensure food security and crop diversity worldwide.