Infrastructure Investment in Africa: How the G20 can help Africa50 Succeed Africa50 was established by 20 African states in July 2015, but it is just now becoming operational.   It aims to fill a gap between private equity funds and development finance institutions, seeking to identify and execute commercial projects with a developmental impact.  The G20 is uniquely positioned to provide both political and economic support to Africa50, thereby increasing its chance of success, while ensuring that it is coordinated and coherent with existing institutions and initiatives.

Why is infrastructure investment important in Africa?

Missing infrastructure is one of the most important limiting factors on growth and development in Sub-Saharan Africa. Missing infrastructure lowers productivity by as much as 40% and GDP by as much as 2%.  This makes its cost on par with crime, red tape, corruption and financial-market constraints. Across almost all different kinds of infrastructure, Sub-Saharan countries lag behind their peers in other parts of the developing world.  The difference is particularly large in the most important sectors for economic growth: transportation, power, and information and communications technology (ICT).  The 2016 African Infrastructure Development Index indicates that so far only ICT infrastructure is really improving. Infrastructure needs of Sub-Saharan Africa exceed $93.3 billion annually, yet less than half that is being provided, leaving a financing gap of more than $50 Billion.

After consultations across the Continent, the African Development Bank (AfDB) helped establish this new investment vehicle in July 2015 with the specific goal of catalyzing greater private-sector investment in African infrastructure. According to its own description, “Africa50 is an Investment Bank for Infrastructure in Africa that focuses on high-impact national and regional projects in the energy, transport, ICT and water sectors”. Twenty African states initially signed up, with $700 million in capitalization.  A year later, two more African states and two central banks joined, with capitalization now approaching $1 billion. The medium-term target is $3 billion.  While initial participation was led by African states to show that they were committed to the new institution and were willing to put ‘skin in the game’, non-sovereign investors – both in Africa and beyond – are invited to participate. This could include sovereign wealth funds from different parts of the world, pension funds, insurance companies and other sources of long-term finance. These kinds of institutional investors are a great fit for infrastructure investments, which tend to be longer term and require larger capitalization. To raise capital and demonstrate commitment to best practices, Africa50 has listed itself on the U.S. Nasdaq Stock Market.

What is Africa50’s comparative Advantage?

Africa50 is more commercial than development finance institutions while being more developmental than private infrastructure funds.  It aims to provide a return on investment, but selecting projects with development impact in mind.  In this way it is akin the International Finance Corporation (IFC), yet focused on the African Continent. It can therefore bridge public and private-sector approaches, leveraging the strengths of each.

In addition, in contrast to private funding, Africa50 keeps a regional approach in mind, which is critical for infrastructure provision. Roads need to connect from one country to another; the gauges of train tracks to be harmonized so that freight can move seamlessly; fiber optic cables to transmit fast, cheap data wherever it needs to go; and power to flow efficiently from generation to consumption, whether within or across national borders.  At the same time, there are many smaller countries that do not have the scale needed to create and maintain stand-alone infrastructure – a regional approach keeps them connected.  It also provides access to scale production and efficient technologies, lowering cost and increasing Quality.

While the AfDB has also had a regional focus and has also been carrying out lending for infrastructure projects, infrastructure lending represents only about half of its loans and grants (e.g. in 2015, the latest year for which data are available, infrastructure projects represented 54.1% of loans/grants approved). In addition, AfDB infrastructure finance has taken on average seven years from concept to closing.  With a dedicated mechanism such as Africa50, the aim is to bring this down to under three years.  Dedicated mechanisms are helpful to focus attention and increase accountability.  The UN Secretary General, for instance, appoints special representatives for critical issues.  Think of Africa50 as the special representative of the AfDB for infrastructure investment.

Why is this relevant to the G20?

First, the G20 can provide political support that increases the likelihood of institutional success. G20 endorsement could create additional legitimacy and thereby encourage other African countries to participate, generating further political and economic momentum behind the effort.  With something like infrastructure investment, with its high costs, building critical mass increases the probability of success.  In addition, G20 endorsement could push down the perceived risk profile of investments, decreasing operational costs and therefore making it easier for investments to be successful.

Second, the G20 can provide economic support to leverage new sources of finance. Africa50 is not that well known in international circles, and yet is seeking to increase its capitalization from $1 billion to $3 billion.  The G20, supported by the B20, provides a network that can raise awareness of this effort and increase potential interest of institutional Investors.

A complement, not a replacement to existing development finance…

Africa50 should be seen as complementing – not replacing – existing initiatives. In particular, African low-income countries (LICs) face tremendous infrastructure financing gaps, yet also unique challenges.  As a result, they may not be able to attract the same level of non-concessional financing, through initiatives like Africa50, as African middle-income countries (MICs); and if they do attract non-concessional financing (especially following the fiscal space created by the HIPC initiative), this may again lead to unsustainable debt levels. As a result, concessional finance, such as provided by the AfDB’s African Development Fund (ADF), needs to remain a central pillar to infrastructure investment in Africa, as insightfully argued by recent work of the Global Economic Governance (GEG) Africa Programme.

To conclude, the newly established Asian Infrastructure Investment Bank (AIIB) has captured the world’s attention, and has been embraced by other development banks as having the potential to complement and not duplicate existing efforts. World Bank President Kim called the AIIB an “important new partner,” and the two institutions plan to jointly develop and fund projects.  What is not well appreciated, however, is that Africa50 is the African analogue of the new AIIB.  The name doesn’t give it away, but the aims and functions do.  If the public understands this, it will help the new institution garner the necessary political support and capitalization to be successful, just as the AIIB has been successful in getting off the ground.

The G20 should support this effort as it is Africa-owned and Africa-led. African states have put ‘skin the game’ – in the form of seed capital – to show their commitment. And the aim is to unlock the developmental potential of private sector activity, which is widely seen as a key mechanism for sustainable growth and to achieve the SDGs. Africa50 is just getting off the ground, so now is a decisive moment that might determine whether or not it succeeds.  A political and economic boost from the G20 could help ensure that Africa50 has good footing on solid ground as it takes its first steps. 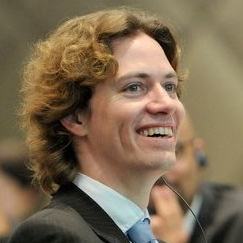 Matthew Stephenson is a doctoral candidate in political economy at the Graduate Institute of International and Development Studies, Geneva.