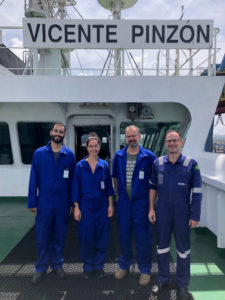 In close cooperation with Leticia Cotrim da Cunha, Professor at UERJ, Rio de Janeiro State University, they deployed a new autonomous marine carbon observation system on board of Vicente Pinzon, a merchant vessel of Aliança. Such a so-called SOOP – Ship-of-Opportunity is a merchant ship, which carries along an autonomous marine carbon observation system voluntarily. Vicente Pinzon will now autonomously collect data while sailing from Santos along the Brazilian coast up the Amazon River to Manaus. The system records data like carbon dioxide, methane and dissolved oxygen in surface water  providing essential inputs for climate change scenarios, climate negotiations and policy.

IDOS covers the political and social science dimensions of the project and investigates the global network system of marine carbon observations, as well as everyday practices from an institutional analysis and epistemological perspective. Thus, as part of her PhD, Ramona Hägele accompanied the deployment of the new autonomous marine carbon measurement system from a social science perspective in order to assess which internal and external processes influence the knowledge production and enable interdisciplinarity. Moreover, she accompanied the process of setting up the system in the laboratory and conducted interviews with scientists of UERJ to receive an insight view into (marine) sciences and the science system in Brazil. Her work predominantly focuses on the interaction of scientists with technology through a social anthropological lens using science and technology studies (STS) approaches.

The project actively contributes to the goals of the 2030 Agenda and the United Nations Decade of Ocean Science for Sustainable Development.