Highlights of the Bonn Climate Change Conference 2019: the role of non-party actors, data and SDGs alignment

The Klimalog project at the German Development Institute / Deutsches Institut für Entwicklungspolitik (DIE) has been organising a variety of events at, and in the margins of, the 50th sessions of the UNFCCC Subsidiary Body for Implementation (SBI) and Subsidiary Body for Scientific and Technological Advice (SBSTA) – or Bonn Climate Change Conference – that took place in Bonn, Germany, from June 14 to 27. DIE events aimed at engaging a diverse audience in discussions around achieving a climate-smart, just and sustainable future.

„In recent years, we have seen an enormous groundswell of all types of actors committing to climate action. This is a very encouraging development. We have also seen how governments and the United Nations increasingly recognize the enormous potential these actors have in terms of providing concrete solutions.” (Sander Chan)

On June 17, Sander Chan (DIE) and Idil Boran (York University, Canada and associate researcher at DIE), organised „Taking Global Climate Action beyond 2020 – Accelerating the Sustainable Future We Want“, an official side event of Bonn Climate Change Conference. The side event discussed the role of non-state and subnational actors in the global climate action agenda beyond 2020, and presented some preliminary results and recommendations from a two-day expert workshop that took place at DIE on June 14 and 15. In particular, recommendations were presented on strengthening interactions between state and non-state or local actors, transparency and tracking of non-state and local climate action, and leveraging climate actions to simultaneously achieve sustainable development.

Niclas Svenningsen, Manager at the United Nations Climate Change (UNFCCC) secretariat highlighted the role of non-state and local initiatives within the intergovernmental process.

Maryke van Staden, director of the Bonn Center for Local Climate Action and Reporting at Local Governments for Sustainability (ICLEI) emphasised reporting as a challenge and opportunity for cities to raise their climate ambitions. According to her, partnerships with universities, research institutes and NGOs allow for better analyses that are useful for local governments. ICLEI also aims to link of climate action to sustainability by assisting local governments in reporting and capacity building vis-à-vis other sustainability aspects, such as access to water.

Hajar Benmoussa, officer at the Mohammed VI Foundation for Environmental Protection, presented the new initiative ‘Award for Climate and Sustainable Development’. By awarding projects that are aligned with both climate change adaptation and mitigation as well as Sustainable Development, the foundation aims to foster synergic impacts.

“What matters to those on the ground? If we don´t see their lives changing, climate action means nothing. Unless farmers, hunters, fishermen – those that are impacted by the consequences of climate change – do not see a change, then we did not solve a problem. “

Njamshi recommends to involve local stakeholders at every level: “They have their stories to tell. We don´t have to bring a lot of science in it.”

Finally, Cecilia Therese Guiao, an environmental lawyer at Parabukas (“For tomorrow”), a Philippine environmental advisory, also highlighted the need for inclusivity, in particular in regard to the tracking of local climate action. Such tracking needs to consider local variety that is not yet reflected in national climate action plans. Moreover, she pointed out that major gaps remain in data and reporting:

Read more in The Current Column of June 24: Rethinking Global Climate Action beyond 2020
Listen to Sander Chan and Idil Boran in the Climate Action Studio

Who contributes to political transformation?

Prior to the side event, Idil Boran launched her new book “Political theory and global climate action: recasting the public sphere” on June 13. Therein she discusses the recasting of the public sphere in climate governance. In an ensuing discussion, Saffran Mihnar from EarthLanka Youth Net, Emanuelle Piault from C40 Cities and Sander Chan from DIE discussed the role and contribution of various non-state actors to climate action.

Telling the wood from the trees

On 18 June, Jonas Hein, Post-doctoral Fellow at Kiel University and associated researcher at DIE, presented his new book on the political economy of REDD+ in Indonesia. His keynote address was followed by a lively discussion of representatives from government, development cooperation, civil society and research on the implications of agrarian conflicts for forest conservation and the relevance of free, prior and informed consent (FPIC) for human rights and conservation policy.

A side event organised by the International Climate Initiative of the German Ministry for the Environment (IKI/BMUB), the Deutsche Gesellschaft für Internationale Zusammenarbeit (GIZ) and the Moroccan Climate Change Competence Centre (4C Maroc) on June 21 focused on the rising issue of developing metrics for effective adaptation planning. Participants discussed the status of and challenges for measuring adaptation to track progress, assess effectiveness and evaluate impact of adaptation actions, as well as to support adaptation planning. 4C Maroc together with DIE are among the 13 founding members of the International Network of Climate Change Centres of Excellence and Think Tanks for Capacity Building (INCCCETT 4CB), which aims to catalyse climate action, foster cooperation, and strengthen knowledge and capacity to support the implementation of Nationally Determined Contributions (NDCs).

On June 25, DIE hosted a dialogue event on “New and innovative approaches to mobilise finance for addressing climate induced loss and damage in the context of climate justice”. The dialogue event was organised by Bread for the World and ACT Alliances. Among other things, participants discussed the question of possible institutional set-ups to administer additional finance to address climate-induced loss and damage.

On June 26, the UNEP Center at the Frankfurt School of Finance and Management organised a side event at the Bonn Climate Conference titled „Developing countries’ NDCs: lessons learned for increasing transparency, ambition, and ownership“, which included contributions to a planned special issue of the Climate Policy Journal. Clara Brandi (DIE) contributed to the discussion by presenting NDC-SDG Connections, an online data visualisation showing interlinkages and synergies of the NDCs and the Sustainable Developing Goals (SDGs). She also presented a research paper by Hannah Janteschek (DIE), Adis Dzebo (Stockholm Environment Institute) and Bernd Hackmann (UNFCCC) focusing on the coherence between the respective voluntary national contributions. The many linkages illustrate how the implementation of the NDCs may contribute to achieving the SDGs, knowing existing and missing interlinkages both can help to improve NDCs in order to raise ambitions and political coherence between the Paris Climate Agreement and 2030 Agenda.

Impressions of DIE and its Klimalog project during the Bonn Climate Change Conference: 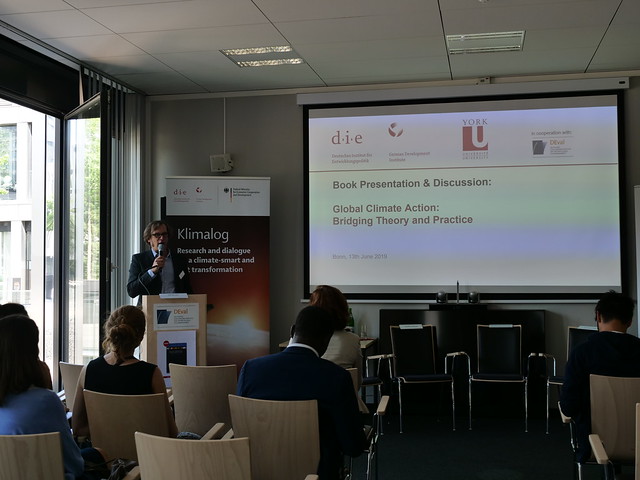 Learn more about the Klimalog project, its publications, infographics and tools!