A Latin American agenda for the G20 With Hamburg G20 Summit drawing closer, so too does the handover of the G20 presidency to the 2018 host, Argentina. In this blog, Jorge Argüello, Chair of the Embajada Abierta Foundation and former Ambassador of Argentina to the UN, explores possible areas around which the Latin American members of the G20 (Argentina, Brazil, Mexico) could work together to ensure Latin American perspectives and priorities are elevated and more effectively represented within the G20 process.

The Group of Twenty brings together key industrialized and emerging economies (G20) that represent two-thirds of the world´s population, 80% of global trade, and 85% of global gross domestic product (GDP). Since the G20’s creation, it has had a constantly evolving agenda, with variations that follow a pace largely set by the great powers. This year’s G20 summit of heads of state and government, to be held in Hamburg, will not be very different.

In particular, by not being able to define a common regional agenda, the Latin American bloc (Mexico, Brazil and Argentina) has struggled to incorporate Latin American priorities into the global agenda and has thus faced an additional historical disadvantage in G20 debates. This year’s G20 process, and the upcoming Argentinian G20 presidency in 2018, make for great opportunities in overcoming Latin America’s legacy of being overlooked in setting the global governance agenda.

In Hamburg, recurring issues from the last decade will yet again be on the table: how to get the global economy out of the lethargy that has set in since the 2008 crisis, and how to do it while maintaining sound regulatory control over financial markets.

Now, a decade on from the beginning of the crisis, there has been an unexpected and disturbing further complication for the G20: the aggressive isolationist and protectionist threat posed by Donald Trump, President of the world’s largest economy.

The first country to feel the political, economic, and diplomatic impact of Trump’s ascendancy was one of the G20’s three Latin American members – Mexico. Trump’s militaristic approach to the deportation of Mexican immigrants is only a sign of how much worse US-Mexican relations can be. However, where there is a crisis, there is also hope for opportunity: in this case, the rediscovery of a more Latin American future for Mexico.

One of the motives behind the G20’s establishment in 1999, was an acknowledgement by Group of Seven (G7) economies that ‘periphery’ or major emerging economies could no longer be treated as ‘by-standers’ in understanding or responding to failures in the global economic system. As currency and financial crises in Asia and Latin America showed, the so-called ‘periphery’ could also foster and spread some of the worst symptoms of unchecked or unregulated capitalism, and negatively affect the rest of the world without distinction. In other words, although globalization had already been underway for some time, there was a growing appreciation in the capitals of major powers that problems connected to unregulated business and rapidly mobile capital shifting were global. As such, the first G20 meeting of finance ministers and central bank governors in Berlin in 1999 was born from an initiative led by the Group of the Seven to expand the number of seats at the lead ‘table’ of global governance (the G7 was known as the G8 during the period of Russia’s involvement up until its eviction due to disagreements about its role in the Ukraine conflict).

Latin America was represented at the first G20 meeting by its three major emerging economies, who remain members today. Mexico, Brazil and Argentina experienced some of the worst economic crises of the 1990s, some of them interrelated, so their participation in the G20 process was seen as valuable by fellow members, as the involvement of the Latin American bloc added legitimacy to solutions that might otherwise have been solely proposed by economies from the North.

However, the nature of these same crises made it difficult for countries to coordinate what were mostly nationally specific policy responses, in turn impeding the development of a broader and more unified regional vision. While Mexico focused on solving the problems stemming from its status as a US neighbor and partner in NAFTA, Argentina and Brazil advanced to a level of unprecedented coordination within MERCOSUR, while Latin America’s Pacific Ocean facing countries worked within their own regional governance arrangements.

Since the outbreak of the 2008 global financial crisis, Brazil and Argentina have raised their voice in the G20 forum in favor of enhancing basic financial regulations. They have also lent their support to public policies of inclusion in the face of the virulent inequality that appears to be on the rise in many countries, even within the great powers, and have emphasized the need for the North to understand that trade under fair rules is a solution to inequality, not a threat. Employment policies and the commercialization of raw materials are also commonly shared elements within the emerging stages of the new Latin American agenda, although this is still in its early days.

Latin America must finally overcome the lack of a well-articulated and coherent position that it usually drags on to the G20 stage. The „Trump threat“ may spark an opportunity for making such an outcome possible, insofar as it might allow Mexico to recalibrate its stance on trade, financial and political issues. Argentina and Brazil in turn must prepare to expand and enrich their regional strategy within the G20.

There is a clear opportunity in front of us: after Germany, the G20 – under the Argentinian presidency – will be hosted in Latin America. That event should find our countries ready to clearly represent our regional needs and expectations as a whole within the G20 agenda.

The care of natural resources and the fair commercialization of raw materials; the promotion of human resources and quality employment; investment in housing, education and health, and unrestricted respect for the right to migrate, these policy goals and others can be the base elements of a shared agenda. However, to attain such an outcome, Latin American G20 leaders must first be able to recognize each other, sit at a table and seriously agree on how, when and where to push in the G20. Otherwise, the global engine and its steering committee will remain in other non-Latin-American hands, and we will continue to take our place as a tailgate on the train of contemporary global history. 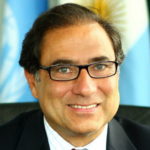