The New U.S. Administration and the German G20 Summit: 3 Things to Watch A dance among major powers

In his inaugural address, Donald Trump declared “From this day forward, it’s going to be only America first” (a phrase, associated with opponents of entering World War II). Former German foreign minister Joschka Fischer commented that “‘America first’ signals the renunciation, and possible destruction, of the US-led world order that Democratic and Republican presidents, starting with Franklin D. Roosevelt, have built up and maintained – albeit with varying degrees of success – for more than seven decades.” (Project Syndicate, “The God of Carnage,” January 27, 2017)

The U.S.-led world order includes not only post-war institutions, such as the United Nations and the Bretton Woods Institutions (the IMF and World Bank), but also the Group of 20 (G20), for which Germany hosts the Summit in July.

President Trump told Chancellor Merkel that he would attend the G20 Summit and, if he carries through and, in fact, attends, he will be joined by other first-timers, including the leaders of France, Italy, the U.K., South Korea, and Germany’s guest, the Netherlands. All eyes will be on the “dance” among the major powers.

Taking a lead in the “dance”, we will see the U.S. administration’s team: Kenneth Juster as G20/G7 Sherpa and Steven Mnuchin, assuming his confirmation, as the Treasury Secretary. Behind the scenes, these point persons will be guided by others, principally China hawks in the new National Trade Council, the Commerce Department, and the Office of the U.S. Trade Representative.

During the G20 calendar of events which culminates in the 7-8 July Summit, one should watch for 3 things:

This frequently happens at G20 Summits and, if history is a guide, the 2017 Summit will be no exception. As a new world order is taking shape, conflicts and crises abound.  Trump has repeatedly criticized traditional U.S. allies and alliances and given mixed messages with regard to the future of the European Union and NATO. NATO’s European member states are concerned, particularly since the President’s rhetoric signals a closer relationship of the U.S. with Russia, possibly leading to a rebalancing of geopolitical alliances.

Many in the European Parliament have expressed the view that Trump’s pick for Ambassador to the E.U., Ted Malloch, is too hostile to the union and its values.

Trump celebrates both domestic and foreign nationalism, with his support for Brexit demonstrating his skepticism of multilateralism.

Oddly, while the U.S. led the creation of the post-war world order, Trump now sees this order as largely hostile to U.S. interests. The U.S. administration is reviewing current and pending negotiations and treaties with an eye to determining which ones the U.S. should leave.  There is discussion of the U.S. cutting funding for the United Nations by as much as 40%.  The new U.S. Ambassador to the UN, Nikki Haley said, “You’re going to see a change in the way we do business… the way we’ll show our value is to show our strength…have the backs of allies and make sure our allies have our back as well… For those who don’t have our back, we’re taking names; we will make points to respond to that accordingly.” But, UN diplomacy also involves trust-building to foster give and take among the entire community of nations, including the 174 countries that lack a seat at the G20.

On the global economy, Trump may want to throw away or re-write the rule book.

Four areas will generate heat, if not light, in G20 discussions.

On Germany’s G20 sustainability pillar, who will step up and lead?

As a climate doubter, President Trump has stated that the U.S. would withdraw funding from some domestic and international efforts related to development and environment (e.g., the Green Climate Fund). The President’s efforts to expand the transport and use of fossil fuels, including oil and coal, are at direct loggerheads with the commitments made by the U.S. in the context of the 2015 Paris Climate Agreement. As the largest historical emitter of carbon dioxide, the U.S. abrogation of its responsibilities would seriously undercut the Agreement.

In terms of international action on the 2030 Agenda for Sustainable Development, U.S. discourse has veered away from the universal call of this Agenda to, for instance, end poverty and protect the planet. Geopolitical and commercial motives are likely to feature prominently in economic relationships with developing countries. Mechanisms for aid delivery are debated (e.g., whether to deliver support through channels such as the U.S. State Department or the Millennium Challenge Corporation (MCC) instead of the U.S. Agency for International Development (USAID).

Due to the uptick in ominous trends, e.g., global warming, economic fragility, growing inequality, and geopolitical conflicts, the G20 and the world community have little time to waste in turning back the hands of time on a number of these challenges. But, at the moment, when an “Independent America” is the #1 risk, (see “Top Risks 2017”), Germany is providing global leadership in an era when a G-Zero world (with a vacuum of leaders) is a threat.

Hence, we should watch to see whether G20 ministers design “menus of options,” so that their Leaders can join “coalitions of the willing” to solve the challenges implicit in the three pillars of the German G20 agenda: resilience, sustainability and responsibility. That would be a desirable outcome, but at the same time, it could strain the bonds of the G20 – even to a breaking point. 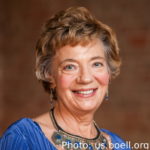 Nancy Alexander is Director of the Economic Governance Programme of the Heinrich Boell Foundation-North America. she has worked on economic, social and environmental justice issues.